A tragedy of the common 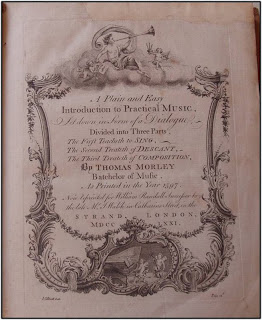 This is the course of the world: that where we think ourselves surest, there are we furthest off from our purpose. -- Thomas Morley

I've been having the pleasure of re-reading Morley's Plaine and Easie Introduction to Practicall Musicke (1597), pleasure, combined with that shock, once again, of recognizing, behind the immediate difficulties of the language, a clear, systematic, and -- in my opinion -- modern accounting of an art of music and a book of ideas for potential music making (his accounting of rhythm, for example, is so rich is possibilities that Anglophones had to wait until Henry Cowell's New Musical Resources of 1930 for a substantial companion volume).

But at the same time, reading Morley is a melancholy experience, for he was writing at a moment in which a musician-scholar could meaningfully survey an entire repertoire, shared by a community of musicians and listeners. And in that community, there was a shared repertoire of whole pieces, forms, figures, & rules to be replicated, extended, & -- judiciously -- broken. The melancholy comes with the recognition that such a moment is long behind us. Now, each composer sets her or his own rules, independent of a community, and if a rule is broken, it's like the the proverbial tree falling in the forest: who's to know?

A friend, David Feldman, call this my "tragic dimension": if I understand him correctly, on the one hand, this is being aware that all is possible but that that richness of possibility comes at the cost of a loss of commonality, while on the other hand, it is the awareness that through new compositional techniques, experiments, one may come close to successfully replicating elements of familiar musics, but one may well also fail, and it's not at all clear how success and failure are distinguished, let alone predicted. I can't deny the tragic side of this, but my working premise has been that there is potential for richness to be found precisely in the tension between the common and the wider field of unexplored possibilities around the common. Moreover, adopting an experimental discipline requires that one learn to take cheer from failure as well as from success. 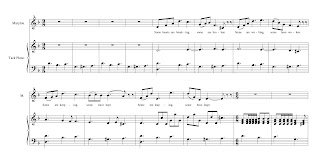 Treasuring the common; looking for common ground. A habit, a folly even, is collecting ground basses -- chromatic lamentos, Passamezzi antico or modern, La Folia (of course), and passacaglias and chaconnes of any length or flavor -- and they can, indeed, ground your work, allowing experiments with figures above and below, but also making a connection to the commons. Some people collect stamps or potato mashers, I collect ground basses. Having cake and eating it, too. Having archaic...
Posted by Daniel Wolf at 12:20 AM