The Future, Getting Old Fast

The future just ain't what it used to be, and when older visions of the future are more attractive then the present reality, our choice is either disappointed resignation or to do the hard labor of imagining an alternative. (Personally, I'm always disappointed when I go to an orchestral concert because the orchestra, in many ways, stopped developing technologically just before the suggestive bits of preposterous steam age technology could flourish as instrumental designs...  in my heart of hearts, with my own future of music being somewhat more retro and steampunkish than, say Stockhausen's or Varese's, I really want orchestral instruments to look like Ophicleides and Marxophones and Dr. Seuss's most preposterous horns and fiddles and harps.

I expect David Graeber new article in The Baffler, "Of Flying Cars and the Declining Rate of Profit", is going to get a lot of attention and it should, not as a finished argument but rather as the beginning of an urgent discussion, around the currently twisted knot of economics, states and institutions, and the limits of imagination. His point of departure is the broad sense of stagnation we currently find ourselves in, particularly with regard to technologies and infrastructure other than information technology.  I believe (and have written about it here before) that this sense is shared in the musical world as well and is perhaps more acute due to the direct and sometimes vital connections between music transmission and information technology.  (Also see this post, from 2006, A Look Back at The Future.) 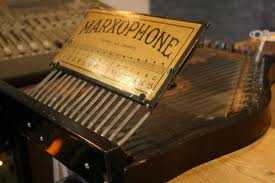 When Graeber writes that, for example:

"The growth of administrative work [in universities] has directly resulted from introducing corporate management techniques. Invariably, these are justified as ways of increasing efficiency and introducing competition at every level. What they end up meaning in practice is that everyone winds up spending most of their time trying to sell things: grant proposals; book proposals; assessments of students’ jobs and grant applications; assessments of our colleagues; prospectuses for new interdisciplinary majors; institutes; conference workshops; universities themselves (which have now become brands to be marketed to prospective students or contributors); and so on.

Simply substitute the name of your favorite musical institution " for "university" in the above text, and you'll get a pretty good synopsis of my own diagnosis of music's ongoing difficulties.  Music (name your genre: classical, modern, contemporary, experimental, film, pop, rock, punk, folk, country...) is not dying, it will continue always, to change over time and survive in interesting ways, but its institutional support structure is under stress and, too often for the good of music, threatens to more often silence musical creation and performance than support it.  It is particularly painful to watch the musicians take the brunt of restructuring and even dismantling of opera houses and orchestras while the managers can command ever higher salaries and bonuses.

Graeber's conclusion should be particularly vivid to musicians:

To begin setting up domes on Mars, let alone to develop the means to figure out if there are alien civilizations to contact, we’re going to have to figure out a different economic system. Must the new system take the form of some massive new bureaucracy? Why do we assume it must? Only by breaking up existing bureaucratic structures can we begin. And if we’re going to invent robots that will do our laundry and tidy up the kitchen, then we’re going to have to make sure that whatever replaces capitalism is based on a far more egalitarian distribution of wealth and power—one that no longer contains either the super-rich or the desperately poor willing to do their housework. Only then will technology begin to be marshaled toward human needs. And this is the best reason to break free of the dead hand of the hedge fund managers and the CEOs—to free our fantasies from the screens in which such men have imprisoned them, to let our imaginations once again become a material force in human history.