I'm not close to the work of Brian Eno, but the title of his essay Generating and Organizing Variety in the Arts did register strongly with me as a student. Programmaticaly alligned with British experimental music in the 70s, the essay's title zeroed in on what seemed (and still seems) to me to be a central contradiction — indeed a paradoxical relationship — around which music is necessarily made. We want a certain level of organization (order, coherence, "sense") but we also want enough variety (which necessarily breaks order, coherence, "sense") to sustain interest over the course of a piece. Now, we can radically break in the direction of either extreme, but human beings have a persistent capacity to find order in the face of disorder and surprise and variety in the ostensibly predictable and uneventful. The music of some composers (Cage and Young, for example) thrives in these boundaries, but in the wide middle territory between these extremes, the going gets more subtle, methinks. Jean Barraque's "proliferating series" for example, in which the order of pitch classes in one twelve-tone series is projected onto the succession of tones in a second series to generate a third will, in most cases*, generate a practically endless sequence of rows bearing no audible or intellectual resemblance in either intervallic profile or pitch sequence to the previously heard series. Working in such an environment of built-in, automatically-generated variety, the composer has to impose organization directly, drawing connections between the tones and intervals at the surface of the music that are not inherent in the material.

____
* Off the top of my head, I suspect that one could feed two initial rows into the process with properties that guarantee a cyclical return to initial rows, probably after a very large number of iterations, but Barraque — like most Europeans, not informed by the concerns and forms of research going on in American twelve-tone theory — did not select for such a feature, requiring, instead, a practically unlimited variety of series. He certainly got that; any tonal coherence heard in his music is the direct result of the composer's asystematic intervention in the placement of tones in time, instrument, register, dynamic, and articulation.
Posted by Daniel Wolf at 8:38 PM 3 comments:

[This diary is an obvious and modest homage to Cage's Diary: How to Improve the World (You'll Only Make Matters Worse. Like that model, it is to be organized into an imagined month of thirty days, with the length of each daily entry determined by chance operations. Cage completed a decimal "year" of ten months over a period lasting from 1965 to 1982 of interrupted writing and these were published, serially in a number of his Wesleyan University Press volumes, beginning with A Year From Monday. I intend to complete a single month and then dismount from my high horse. As with Cage, chance operations — I use poker decks — here determine the length of each entry. (This entry was assigned a length of zero, so I have inserted this explanation between brackets, rendering it sort-of invisible.) Topics for each entry here are derived from reader suggestions, at least two of which are required to initiate an entry. The topics were suggested by others but I take full responsibility for the direction of discussion here. Cage used a variety of typefaces in his Diary, contributing to the greater fragmentation of his entries. Considering this text to be somewhat urgent, if quixotically so, I decided on a greater, but far from absolute, degree of continuity in both prose style and layout.]
Posted by Daniel Wolf at 8:14 PM No comments:

I couldn't resist: bought a music box which plays the opening strain of The Internationale. Sweet, nostalgic, smartly (if archaically) mechanized and commodified. Sounds great when played against a Coca Cola (TM) can resonator. Sign on the lawn in New Hampshire, next to a lunch wagon, now in competition with a major chain: BUY LOCAL DONUTS. The modernity and internationalism once dreamed of was not what we got. There is something fundamentally wrong when (a) the most striking features on most of the landscape one passes through in the US (and increasingly elsewhere) are commercial and (b) the major distinction between New Hampshire, for example, and, say, Mississippi, is that the latter has Waffle Houses. A recent campaign in Vermont encouraged listening to locally-made music. BUY FROM LOCAL COMPOSERS. Maybe, in the long term and from a very narrow definition of costs, the Waffle Houses and the Dunkins (or, if you will, the Brittens and the Boulezi) will win out over the local vendors, but (a) all innovators started out local, somewhere, and (b) the locals still have the powerful argument that local content can be fresher, a better fit to local tastes, and sustain forms of variety and innovation that the universal and generic cannot.
Posted by Daniel Wolf at 5:33 PM No comments: 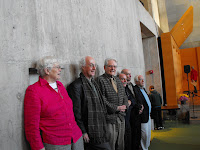 My great, good fortune: to continue to learn from my teachers. I was fortunate not to struggle with my teachers, but rather to learn from their struggles, which were largely against rigid institutional structures and closed networks and their implicitly pessimistic estimates of the possible limits to how and what music gets made. Their practice, creating new, alternative institutions and networks — often modest, provisional, and transient — remains model and sometimes even a musical modus in its own right. But most of all, against this background, these musicians provided — and continue to provide — a profoundly optimistic assertion that the extent and limits of the musical are not yet known, let alone established. I also learned this: technology is resource and an opportunity, but there is a deep difference between a faith in technology — the technological fix (from the RCA synthesizer to the Synclavier or the 4X) — and the creative ((mis)appropriate) use of what one has available, whether it be sticks and rocks, fine old Cremona fiddles, industrial electronic surplus and hand-soldiered circuits, off-the-shelf consumer products, or just our clapping hands and singing voices. Means not ends, music not institutions.
Posted by Daniel Wolf at 3:44 AM No comments: