I am deeply saddened to learn of the passing late Saturday of Douglas Leedy, also known as Bhishma Xenotechnites, composer, music and classics scholar, teacher and friend. The native of Portland was 77 and had been ill for a long time, but the news still comes as a shock, having just moved into a hospice facility in Corvallis, Oregon.

In his life and work, Doug followed an extraordinary trajectory away from the current trajectory of western civilization, with his passions for nature and the environment directing his musical searches, rejecting both virtuosity (he had been an orchestral hornist) and the (not quite) equal-temperament of the piano, digging deep into the past of European music (he founded and directed the Portland Handel Festival, where he conducted rare performances of the oratorios Theodora and Jeptha from the continuo keyboard), to Ancient Greek and Latin Music as well as an intensive study of South Indian music in Madras with the great vocalist K. V. Narayanaswamy. As a composer, he had studied at Pomona College with Karl Kohn (but was closest to William F. Russell, the director of choirs and Department Chair) as well as with Lukas Foss as Crofts Fellow at the Berkshire Music Center in 1958 and then went to Berkeley where he studied with Seymour Shifrin, William Denny and Joaquin Nin-Culmell and was part of an extraordinary group of students including La Monte Young, Terry Riley, Pauline Oliveros, and Paul A. Epstein. Upon completing his MA in composition, he began work on a (never-complete) dissertation on the songs of Berlioz and played horn in the Oakland Symphony and San Francisco Opera and Ballet orchestras.

His Bay Area years included the premieres of chamber and theatre works, including his Octet: Quaderno Rossiniano, an assembly of Rossini fragments, mostly from internal instrumental parts and Decay, a theatre work composed in collaboration with Ian Underwood and staged by Robert Moran. Leedy's Wind Quintet, a piece of considerable complexity, earned the enthusiasm of Gunther Schuller who commissioned a new work for the Tanglewood, Usable Music II in Bb for (untuned) wind ensemble, a work featuring the instrumentalists cynically reciting texts drawn from Piston's orchestration textbook through their horns.  The reception in the Berkshires was one of considerable controversy (that Leedy was not invited back to the Tanglewood event 2008 celebrating the "class of 38" is one sign that the scandal had not waned!)  He spent years abroad in Venezuela and Poland. Called to teach first at UCLA, where he established the electronic music studio and was commissioned to compose several albums of electronic music, including the landmarks of environmental music (i.e. "ambient" music before ambient music was a thing) The Electric Zodiac and Entropical Paradise.  (Selections from the latter were featured in the soundtrack album to the film of Slaughterhouse Five;  realizations of one of the Entropical Paradise pieces have become standard repertoire in the analog synthesizer community.)  He later taught at Reed College in Portland before exiting the academy for a life of even more intense but strictly independent scholarship, which culminated in his late settings of ancient lyrics — a substantial portion of which he could sing from memory — as well as a monograph on the subject, which I have pointed to here before. Among his major later works are Canti, music for contrabass and chamber ensemble composed for Bertram Turetzky, Sinfonia Sacrae, for soprano, viola da gamba and harpsichord, books of music for keyboards in just and meantone tunings, Pastorale after Horace for chorus with retuned piano, 4-hands, Sur la Couche des Miettes for mixed ensemble, a Piano Sonata in memory of John Cage, and Three Symphonies for unison orchestra, without conductor or rehearsal.

I first met Doug at the Early Music Workshop in Idyllwild, California, led by my teacher Shirley Robbins. I was 14 and we have been corresponding ever since, making it now 39 years. He gave me a copy of Lou Harrison's Music Primer and I will forever be grateful for that, a perfect gift for an aspiring composer with experimental ideas. He was the last of the great letter writers; though he would sometimes use the Internet in a library, he didn't own a computer of his own or use email. We sometimes telephoned, most memorably during the days while Mt St Helens, above Portland, was erupting, but he could get cranky on the phone. He preferred pen and paper and each letter is beautiful to read as well as to look at and his concerns went from the environment to politics in general, to music ancient and much less so. A vegetarian, he kept a good garden whenever he could and kept his environmental footprint small. I don't know believe in the notion of 36 Tzadik, hidden righteous ones who secretly keep the whole planet in order by justifying humanity to God, but if I could be allowed a smalled gathering of the righteous, inspiring personal confidence in humanity, Doug, Bhishma, would have been very much among them.

As long as we're talking Sappho, let me note that the Sapphic stanza provides a very attractive metric for non-lyric composition as well. Here's a modest example, using  Sapphic stanzas and chromatic tetrachords, from a set of pieces I made for my daughter to play: 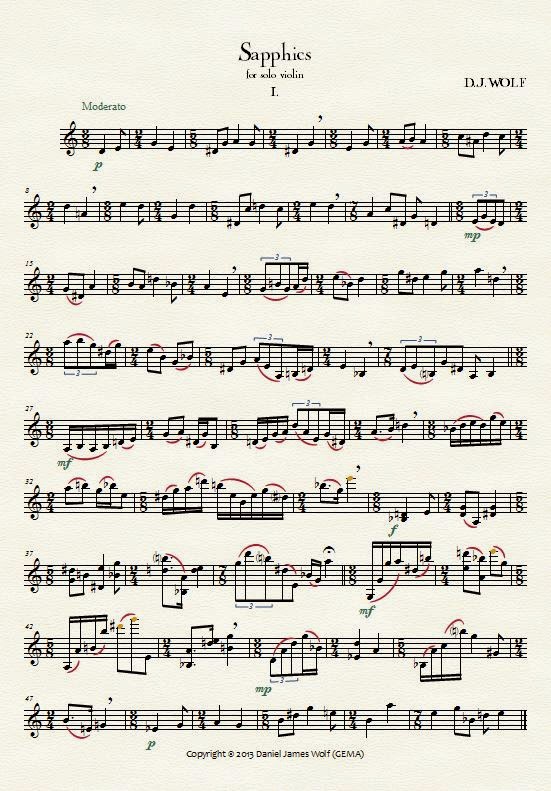 The New Yorker has a fine review-article coinciding with the publication of Diane Rayor's new volume of Sappho translations (Diane is an old friend and it's been an intellectual adventure and aesthetic pleasure to be able to watch her shape and re-shape her Sappho over decades.)  The reviewer, Daniel Mendelsohn, has also attached an article about trying to recover the music in Sappho's poems, here, including a recording of a Sappho "performance" by the late Columbia classicist Stephen Daitz. With all respect to Prof. Daitz, while we get an exaggerated version of the pitch accent of spoken Ancient Greek, I don't think his recitation actually recovers much music. Much better is something like this reconstruction by Douglas Leedy which actually dares to compose a melody that complements the natural pitch accent of the Greek: 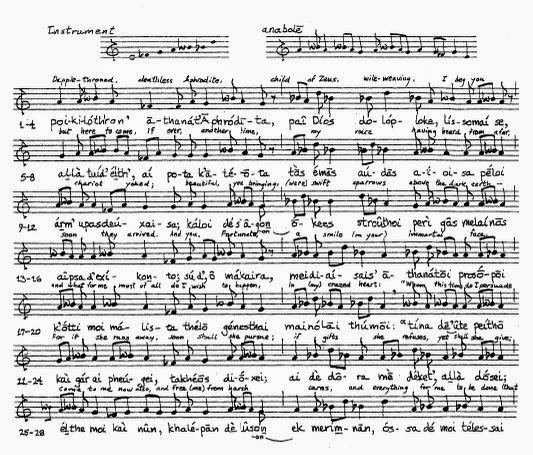 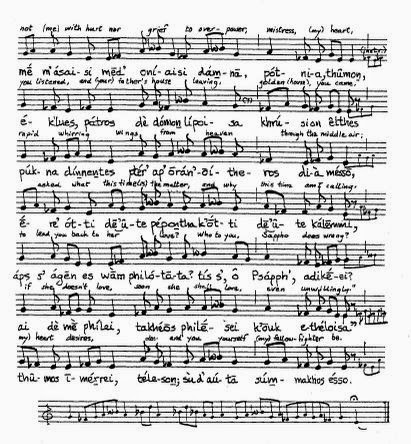 Composing, or: From One Wreck to Another

You finish a big project and what's left over?  Wreckage: Flotsam, jetsam, lagan and derelict.  Some on paper, some in the head, some sounds still ringing.  Some can be recovered, recycled, others can be abandoned, most without regret. The next piece, always the next piece.
Posted by Daniel Wolf at 11:50 PM 1 comment: