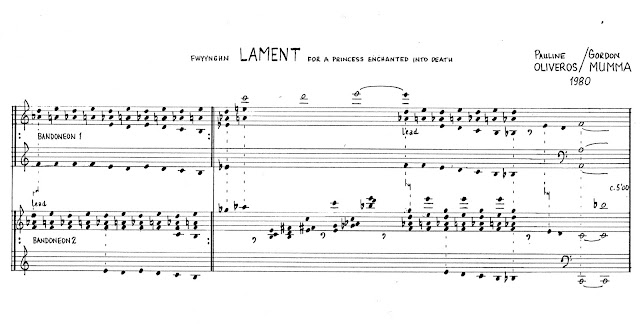 Pauline Oliveros had a rare presence and that presence will continue; it had a spiritual, even mystical, character, capable in her music of heights, yet was reliably down-to-earth, mostly tender, sometimes fierce, but often profoundly funny.  She was a pioneer in musical theatre pieces (Double Basses at Twenty Paces, Big Mother is Watching You, Crow II, Rose Moon, Njinga the Queen King, Io and Him and the Trouble with Her,  The Island of Maps), in the use of electronics in music (I of IV, Bye-bye Butterfly, and all of her work founding or co-founding electronic music studios and with the live music enhancement innovations of the Good Sound Foundation reflecting her continuous interest in sound as and in environments), and in her tight wire walk between composition and improvisation in which she found unique balance — and extra-musical echoes — in her special genre of innovation, the sonic meditation.  She was always a performing musician — an accordionist, first (I have to note that the solo accordion part to Ramon Sender's astonishing Desert Ambulance was made for her, a part with verbal instructions on a parallel tape track heard only by the soloist), but also a horn and tuba player, singer, electronicist, and (see above) an occasional bandoneon player — but her instruments were just instruments, means to ends rather than virtuoso objects in themselves, and ends in question were, ultimately, sharing her own presence and making articulate its, and our, place in the environment.

(As a Californian, I think I have to throw in the phrase "appropriate technology" here: Pauline's accordion would co-evolve with her, first being retuned in a just intonation with a series of just fifths on one side separated by just major thirds, and on the other the fifths separated by harmonic sevenths, later the whole thing becoming midi-fied, as an elaborate, bellows-breathing, controller.)

May I note one aspect of her work that I find to have a powerfully feminist component?  Though she had formidable chops in conventionally written notation (see, for example, her early Songs to texts by Duncan and Olson, the Variations for Sextet, or the Trio for Flute, Piano and Page Turner (I can't help but note the importance of her teacher, Robert Erickson, in arriving at these pieces)), her mature music did not privilege that form of transmission over texts, images (mandalas, in particular, or oral/aural-transmission. When Oliveros introduced herself and her Sonic Meditations in a 1971 issue of Source: Music of the Avant-Garde magazine, she was frank and most radically, for me, in her identification as a natural being (a two-legged human, to be exact, keeping the company of many animals) and with Sappho as an archetype (I suppose we'd now prefer 'role model') of suppressed women composers:


Pauline Oliveros is a two-legged human being, a female, lesbian, musician, composer among other things that contribute to her identity. She is herself and lives with her partner... along with assorted poultry, dogs, cats, rabbits and tropical hermit crabs. She is devoted to the elevation and equalization of the feminine principle along with the masculine principle. The feminine principle is subjugated in both women and men, personally and transpersonally. She believes that Sappho, the great Greek poetess was the archetype of women composers and that the destruction of her work by the early Christians is representative of a movement which eliminated and suppressed all models of women a creators in the arts. She is further devoted to uncovering, establishing, and encouraging new models to which women and the feminine side of men can relate.


The Sonic Meditations that followed were text scores, dedicated to the ♀ Ensemble (and that other pioneer, Amelia Earhart (!)) and were not intended primarily for concert performance but as "group work" for developing "positive energy."   Now, some of this now has a somewhat dated or faded tone, given the whole "new age" or "human potential" thing that came in intervening years (and yes, to be honest, I'm not completely at ease with Oliveros's program of "Deep Listening" (though I have pushed enough for a not unrelated "slow listening", here)), but above and beyond its solely musical attractions, this work was prescient, honest, and suggested productive ways of changing the way in which people made and used music, not just as passive consumerism.  And however faded, I suspect the next years will bring some new urgency to the more political, especially feminist, aspects of this work. I'm not sure exactly what Deep Listening is, and it may be, to some extent, musical snake oil (a thought Oliveros probably would have enjoyed laughing at) but, to the extent that it's not casual listening and that it opens musical listening up to the wider experience around the music, the people engaged in it, the environment around it, it's a good thing.

There will likely be many memorials online and off, each focusing on different aspects of her work. Here I'd like to emphasize this environmental dimension, which I think has roots in the notion of her teacher Erickson that "every composer composes his/her environment", in the expansiveness of the Bay Area's emerging genre of theatre pieces (the "Chamber Opera" version of La Monte Young's Poem for Chairs, Tables, Benches, etc. may have been the first of the kind), and in work that Pauline and Douglas Leedy were first doing in the Bay Area in the 1960s, likely beginning with Leedy's garden party music Exhibition Music 1964, and continuing with self-sustaining electronic enviroments by both (Leedy's Electronic Zodiac and Entropical Paradise are the best-known examples of this work) but, ultimately, I think, for Oliveros, evolving into refined electronics for enhancing live instrumental and vocal performances.  Ever a great collaborator, one of the major events in her early career was the first major festival of the work of David Tudor (for which event she wrote Seesaw for bandoneon and accordion duet (the players were on one such piece of playground equipment) with "possible minah bird obbligato" (yes, her pet bird participated)) and although Tudor began as a mentor, I think it was Oliveros's example that enouraged Tudor in his own environmental-musical concerns, from the scrapyard loudspeaker Rainforest to the insect sounds of Dialects or his later investigations of natural underwater sounds. 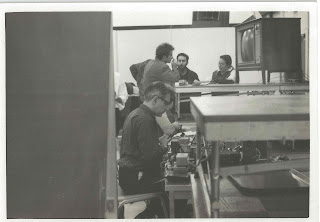 Pauline Oliveros is dearly missed (have I mentioned that I already miss her voice, so comfortingly droll and slightly drawling?), but I'm certain she'd counsel that we use this opportunity to simply keep making music, her music, your music, our music, and pay deep attention to the world it is in.