The Monochord Does Matter 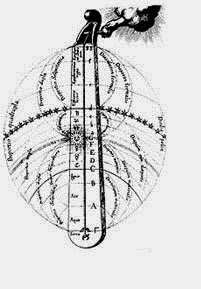 I am very pleased to be able to share a treatise on the monochord by Bhishma Xenotechnites,  an extraordinary musician and scholar, who has been my teacher and friend for almost 40 years. I have previously called attention here to several compositions of his as well as a major book on singing classical Greek epic, lyric, and dramatic verse. This new essay, Monochord Matters or The Power of Harmonia can be understood as a report on how an ancient and simple instrument, the monochord (or, classically, Kanon) — essentially a stretched string with a bridge somewhere along its length — opens up a world and a worldview, the part of the quadrivium we usually call music, but more precisely known classically as harmonics, the art/science that begins most concretely — physically and sensually — in the realm of the rational. The author wisely keeps the balance, no, the tension, between perception and reason which is the central dynamic of the enterprise, unresolved.

A PDF of the text is available here, as well as at the link provided by Charles Shere, whose item on Monochord Matters is worth reading.
Posted by Daniel Wolf at 1:41 PM No comments:

News comes 'round that the musician and musicologist Bob Gilmore is gone and gone far too soon. Gilmore specialized in the performance (in particular as keyboardist with the Trio Scordatura) and study of music with alternative tunings.  His biographies of Harry Partch and Claude Vivier are landmarks, he edited the valuable collection of writings by Ben Johnston and had only recently begun an exciting tenure as an editor of Tempo.  Gilmore's recent series of podcasts about music he valued are well worth your attention, here.  We never met in person, but our paths crossed by post and email and online many times over at least twenty-five years and with our shared interests (i.e. Partch) and serious disagreements (i.e. Radulescu), a long promised and oft-broken sit down to chat is now postponed for ever.  He was a smart, kind, and generous man and will be sorely missed.
Posted by Daniel Wolf at 10:36 PM No comments:

A while back, I wrote a bit about the first of Schoenberg's Three Piano Pieces Op. 11 from 1909.  I can't quite let the topic go without mentioning something extraordinary that goes on in with his use of musical time. I'm using the words "musical time" here, because what he is after is something that, although rather modest in scale, is really outside the box for "rhythm" in everyday usage and here you can hear (and see, in the notation) Schoenberg really stretching the limits of notation. 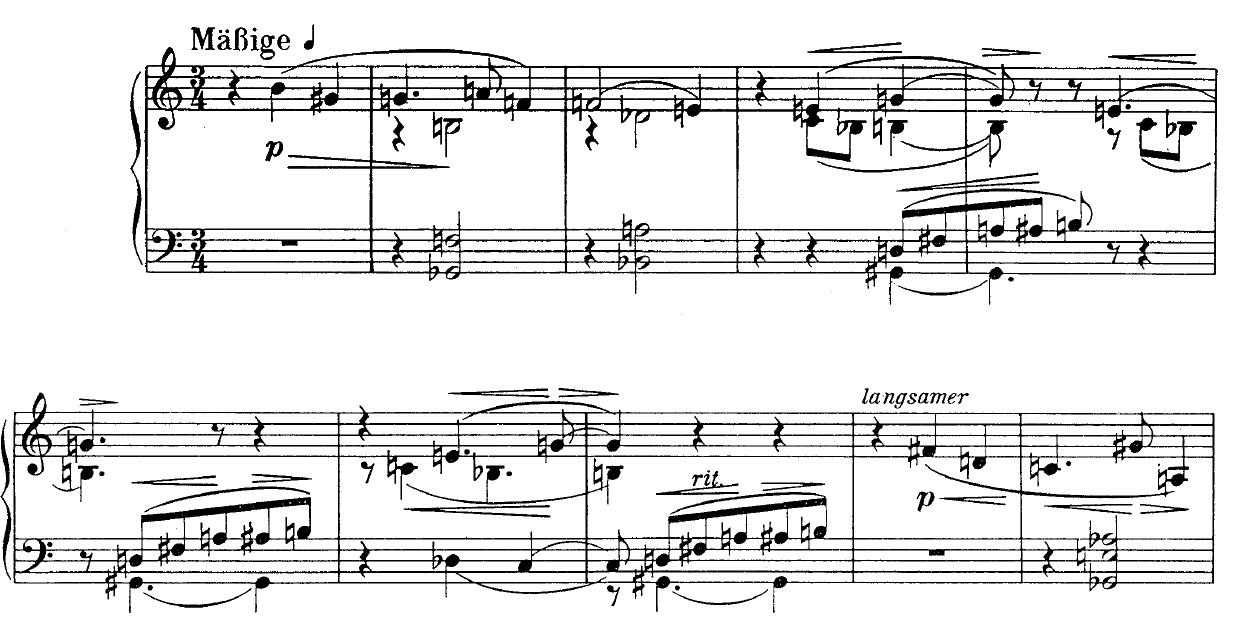 Look at the gesture in measure four and the first quarter and a half of measure five.  The right hand part then gets repeated twice, each time augmented in duration and with two different arpeggiations of its two voices, the last repetition with an added contrapuntal voice in the middle of the bass clef. The left hand part, on the other hand, gets detached from its position synchronized with the attack of the b-g' dyad of the right hand and instead enters with a delay of first one eighth after the dyad and then in an arpeggio g' - b - left hand.  The left hand figure is not, however, in augmentation, but maintains its eighths-over-a-sustained-bass dimension, with, however, a ritardando over the last statement.

Now, there are precedents for all the details here, so I don't want to make a priority claim for Schoenberg, but I do want to indicate how much this is at once in the spirit of his own tradition and in dissonance to it. The Wiener Espressivo tradition from which Schoenberg's music came was at once — coincidentia oppositorum — a strongly metric one and one that delighted in a continuity of subtle and not-so-so deformations of the metric, both within a measure (leading to great inequalities of beat lengths) and between measures and phrases, with a highly flexible tempo overlaid in frequent accelerations and slowing-downs.  These deformations could come about from a marking (rit., accel. etc.), traditional performance practice, or spontaneously.* The measure unit throughout this, however, remained very clear, perhaps a marker of the centrality of dance to the style (with its necessity to regularly mark the moments when feet were expected to touch ground.)

But Schoenberg here goes astray at the measure with his augmented durations in the upper voices making a written-out ritardando with some expressive arpeggiation, so the figure crosses the barline before measure five and floats away from any metrical attachment in its two further iterations.  But the left hand maintains the eight-note tempo strictly and then with a verbal, rather than written-out, ritardando of its own.  Something has to give here, and that something is the metrical strength of the barlines at measures five, six, seven, and eight, but that left hand figure at measure eight, even under the ritardando marking, very clearly leads us to the (unsounded, but felt) downbeat and new, slower, tempo at measure nine.   So we have a two-handed figure get separated into a decelerating and a steady part which loosen enough to detach from the metre, floating over five bars, yet come back in synch to form a sensible anacrusis to the next phrase.

I think this little waltz phrase with which this piece begins and then periodically, if fragmentarily, returns to (note the smooth but startling deformation of the metre into a few measures of 4/4 on the last page of the piece) opens a particularly rich field of prospects and problems with musical time that Schoenberg only touches upon here (or later in his catalog, which would continue to be dominated by his strongly conventional sense of metre and phrase.)
_____
* My impression is that Schoenberg's composing here (as frequently in other works) was, in large part, improvisatory, with reconciliation to notational practicalities a secondary thought.

Posted by Daniel Wolf at 1:44 PM No comments: