What a composer says about her or his music is often misdirection (intentional or not.) In this aspect, composing can be thought of as a form of stage magic with a similar arsenal of tricks (production, vanishing, transformation, restoration, transposition, transportation, escape, levitation, penetration, prediction.)
Posted by Daniel Wolf at 9:13 PM 2 comments: 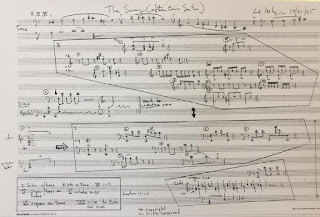