Long since disappeared into that void formed by too many moves — between houses, between towns, across one continent, then an ocean, and then back and forth within another continent (hopefully to stay put for a while (I'm tired of moving)) —are my copies of my high school yearbook.  And more to good, I say, that that era of youth, but bad haircuts, has vanished from the evidence room.

But at least there is THE EXPERIMENTAL MUSIC YEARBOOK, here.  No bad haircut photos in it, but plenty of good things to read, hear, watch.
Posted by Daniel Wolf at 9:15 PM No comments:

This year, even more than years past it seems, I've heard colleagues complain loudly about the letter-of-recommendation season, and these colleagues come from among both the letter-seeking and letter-writing.  A routine expectation has developed that all applicants for scholarships, jobs, and advancement need to accompany their applications with three letters of recommendation (LORs.) Now, there are a few large institutions with job placement offices that have got a system in place for reproducing application portfolios complete with copies of "to whom it may concern" LORs, and in many cases this system works well enough, but most applicants find themselves asking their LORs-writers repeatedly for letters and more LORs-writers dutifully generate those letters, and in many cases, write updated or entirely new letters tailored to the particular job or opportunity. All of this amounts to a lot of time and effort and no small amount of social awkwardness, and when the actual statistics of the crapshoot that these job markets and such are considered, most of this effort, — including LORs that are written in very thoughtful and considerate ways — is simply lost in the mass of materials received.

As someone who is (mostly) out of this business — rarely applying for anything and almost equally rarely being solicited for recommendations — may I be considered a neutral party when I make the following recommendation to persons or institutions taking applications for scholarships or jobs?

Do not require completed LORs for initial applications.  Instead, require that applicants provide a list, with titles and accurate and up-to-date contact information, of three persons qualified to advise on the applicant and her or his work.  Perhaps specify if you'd like to hear about teaching or performance or compositional work or scholarship or collegiality in particular and encourage the applicant to nominate people who could write or speak authoritatively to that particular area.  Do not require applicants to ask these people for LORs themselve, but, after having made a narrow selection from your applicant pool, contact these persons directly.  This is an indication to the recommending party that their opinion has been sought out confidentially and is being taken seriously in a process with some chance of success.  This is respectful of both your applicants and your recommendors, at the very least in terms of their time, and it is also more likely to yield recommendations that are less generic and more responsive to the particulars of your situation and search.
Posted by Daniel Wolf at 1:09 AM 2 comments:

While I'm comfortable enough with the phrase "experimental music" (let me cheerfully remind that Gershwin's Rhapsody in Blue was premiered at a Paul Whiteman concert billed as "An Experiment in Modern Music") particular when the outcome of the compositional work is unknown, and because there is a known historical repertoire or tradition to which this label — sometimes more, often less, accurately — is attached, I may be more comfortable with identifying music as inventive, or individual works as inventions.  Though my immediate nod of acknowledgement  here goes to poet Charles Bernstein (in his essay/interview collection Attack of the Difficult Poems), there is a legitimate tradition in music of using the term, from the contrapuntal keyboard Inventionen of Bach (in his "learned" mode) to the handmade circuitry virtuosi of more recent days (with added hat tips along the way to the fathers of Charles Ives and John Cage as well as those imaginatively monstrous soundmaking inventions of a Percy Grainger or Harry Partch and every Wagner Tuba or Sousaphone you'll ever encounter.) The term invention gets us usefully out of characterizing and evaluating a work based on whether a precise and verifiable experimental method has been carried out and takes us more, well, musically, into a realm of trial and error in composition, performance and audition, with evaluation — does this "work"? is this compelling? does this stretch of sound — this potential (hat tip to the Oulipo here) music — actually achieve the musical? — usefully returned to questions of aesthetics or taste rather than experimental demonstration without relinquishing the thrill associated with the experimental that comes from the potential, the risk, of failure.
Posted by Daniel Wolf at 9:57 PM 1 comment:

Our music's history has more texture than the textbooks say

Received music history and the repertoire or canon that comes alongside it is necessarily streamlined and condensed.  It's got to fit into concert programs, program notes, survey course semesters and textbooks and, whether as advocates or critics, we tend to try to make it fit some larger arc, trajectory, argument or narrative.  And so both works of monstrous extraordinariness and ordinary repertoire get selected and fit, and much gets lost, forgotten or simply set aside as inconvenient in the process.  And that's mostly okay, because most musical ventures can be lost or forgotten without major loss, making room for further refinement, other voices, and even some altogether new ideas. But the inconvenient omissions often require some attention, if only to tug at the edge of our certainty with regard to our arc, trajectories, and narratives and see if we needn't recalibrate or retell them.

Here's a narrative-challenging example, from my work on the Douglas Leedy Nachlass, a previously unpublished and — I believe —  publicly unperformed piece dated 5 April 1964 with the title Spatial Rotation of 10 to 20 Like Instruments: 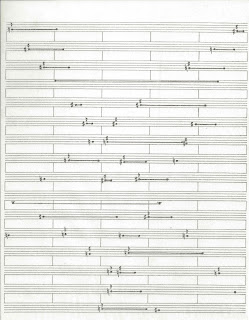 The 10 to 20 instruments — the composer suggests either clarinets, French horns, trumpets, violas or cellos, providing fingering charts for clarinets or horns — are to be distributed widely throughout the performance space.  Each of the instruments may begin at the beginning of any measure (excepting those measures in which a tone has already begun), continuing left to right, top to bottom (and back to the top), continuing strictly to a common tempo which varies by and is exactly proportional to the number of players, until returning to the initial point.  The pitches consist of the outer tones, b and e'' and eight tones microtonally spanning the interval between a raised f#' and lowered a', so that a maximum-content static but internally continuously changing sonority is produced which could be though of as an inversion of a triad on e, in which the internal tone is varying, blurred, and beating within the space among the plausible thirds above the tonic.

I have not heard this piece except in a rough mock-up on my computer, so I will reserve judgment about whether it "works" or not as a concert work, but I do think that it has a distinct character and internally engaging sonority that could only be richer in a live performance in a real space.  To the point, now, it is very striking in its historical context, reflecting the individual concerns at that time and place of the composer and the "scene" in which he was then working, and I believe that it presents some real challenges to our sense of how music history subsequently went, in particular as there as aspects of the piece which strongly connect to some music of the 80s or 90s by composers including Cage, Feldman, Tenney, or  Lucier.  To understand its position in the Bay Area scene, consider that it was written at approximately the same time as Terry Riley's In C, the Spring of 1964 (In C would receive its first performance in November of the same year) and that it was written while the composer was in the graduate composition seminar at UC Berkeley.  The surviving materials suggest that it had been read through in some form by student musicians for the seminar but not in a public concert; indeed it is difficult to imagine the piece getting played on either practical or aesthetic grounds in that setting and my suspicion, based on conversations with the composer is that he was discouraged both by the unlikelihood of gathering 10 to 20 like instruments with players sympathetic to the piece and the lack of sympathy from Berkeley professor Seymour Shifrin. But nevertheless, the score represents a nexus of Leedy's  interests: a non-developmental or even uneventful environmental music, a static harmony based on a fixed gamut of tones,  a degree of indeterminacy, canons, intonation, mathematically-determined time lengths, and something broader with regard to texture that looks forward to — and perhaps helps explain — his stay in Poland during 1965-66.