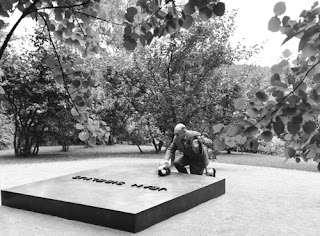 Pliable has it right: "... give me one bar of Sibelius for one symphony of Shostakovich."

I'll go one further: If we had walked away from the 20th century with only the scores to the Fourth and Seventh Symphonies of Sibelius, we'd still be left with sufficient material to reconstruct everything essential that had been left behind.

(photo: Stravinsky at the grave of Sibelius, image stolen from PWS's blog, Tears of a Clownsilly).

Labels: state of the art

A serious question: What is wrong with the music of Shostakovich? I find widespread hostility to his music from many people, particularly people with musical training (less so from non-musicians), yet almost nobody has been able to tell me what precisely they dislike.

In this post, I believe that I was careful to elevate Sibelius rather than deprecate Shostakovich. However, your question is a serious one, and I do happen to have a major reservation about Shostakovich's music. I'll try to articulate this in a post next week.

I have reservations about Shostakovich too. It will be interesting to hear what you ahve to say.

Also, Sibelius feelings seconded. The music is so damn strange and the way he writes makes so much of it memorable and haunting: his odd harmonic touches, the terse but often wrenching melodies that dissolve and fragment, the quizzical orchestration.

I have yet to find many pieces that flow as perfectly and are as inspired in every bar as the first movement of the 6th.

PS-Is that picture really from my blog? Ive seen it but I don't remember where I would have posted it. And it must be noted that you stole it from me, who stole it, as all his pictures, from google image! Internet collectivism, I propose.

I like both Shostakovich and Sibelius, with a special nod to the latter, and they both seem to have gone through long periods where they were either underpraised or overpraised.

And Daniel/PWS, the preferred usage these days is "sampling," not "stealing," for the Use of the Great Internet Collective.