Leedy: The Leaves Be Green 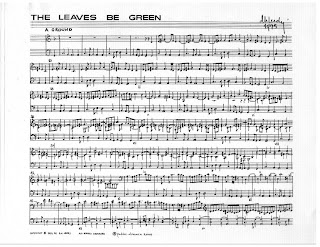 Here's another reminder that the roots of the music that is widely called "minimal" are broader than the received history. Before the term minimalism came into play, terms like "static" or "repetitive" were more commonly in use, and especially among a loose cadre of west coast musicians, including students at Berkeley and in San Francisco (in particular, those who studied with Robert Erickson, William Denney, and Darius Milhaud). Douglas Leedy was a classmate of Riley and Young at UC Berkeley, but did not have their background in Jazz. A hornist, singer, and keyboard player, his interests turned more towards early western music and, later, to South Indian classical music. An accomplished classicist, he has also made a deep exploration of ancient Greek and Latin literature and the music much of it once carried. Leedy's The Leaves Be Green (1975) is a particularly rich example of this other minimal tradition, connecting to the virtuoso early English keyboard music, as well as through extended pedal points, repetition, and subtle microrhythmic variations to South Indian music and to the music of his contemporaries. The pure major thirds of meantone tuning are also an essential feature of this music.

A PDF file of the entire score is available here. (Largish file)
Posted by Daniel Wolf at 1:04 PM

I think the roots of minimalism are much older than that. Listen to Bach's C minor prelude in Book 1 of the 48.

How did this piece become 'public domain'?

The composer himself released the score in public domain.