Sesquialtera, or Philomathes Beats His Brains About

The Fredösphere notes the resemblance between the title music in Bernard Hermann's score to North by Northwest* and parts of Philip Glass's score to Koyaanisqatsi. A key point of resemblance is the alternation between measures in 6/8 and 3/4 metres sharing a common duration and basic pulse, creating a propulsive effect which features in a lot of other music -- familiar examples are to be found in Bernstein, John Adams and many others. In much early music a similar propulsive effective occurs between sections of a piece, also in the 3:2 proportion, or sesquialtera, three and two subdividing a common larger unit but not necessarily sharing a common pulse, so, for example, a measure of two halves will have the same duration as a measure with three halves in the neighboring section. As a matter of course there are more complex examples of such modulation in both old and new music**. Here's the master himself, Thomas Morley (from A Plain & Easy Introduction to Practical Music), with a list of proportions that probably includes all of those within a practical limit of accurate human performance:

Philomathes. Come then to Sesquialtera, what is it?
Master. It is when three notes are sung to two of the same kind, and is known by a number containing another once, and his half 3/2 6/4 9/6 the example of this you shall have amongst the others. Sesquitertia is when four notes are sung to three of the same kind, and is known by a number set before him, containing another once, and his third part thus. 4/3 8/6 12/9 And these shall suffice at this time: for knowing these, the rest are easily learned. But if a man would engulf himself to learn to sing, and set down all them which Franchinus Gafurius hath set down in his book De proportionibus musicis, he should find it a matter not only hard, but almost impossible. But if you think you would be curious in proportions, and exercise yourself in them at your leisure. Here is a Table where you may learn them at full.
A table containing all the usual proportions. 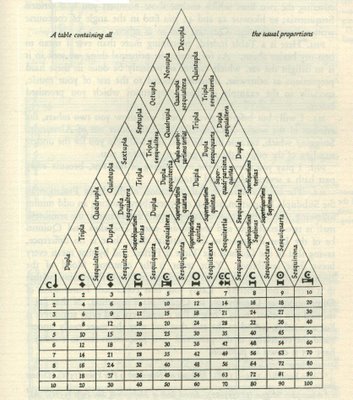 As for the use of this Table, when you would know what proportion any one number hath to another, find out the two numbers in the Table, then look upward to the triangle enclosing those numbers, and in the angle of concourse, that is, where your two lines meet together, there is the proportion of your two numbers written: as for example, let your two numbers be 18 and 24. Look upward, and in the top of the triangle covering the two lines which enclose those numbers, yon find written sesquitertia, so likewise 24. and 42. you find in the Angle of concourse written super tripartiens quartas, and so of others.
Phi. Here is a Table indeed containing more than ever I mean to beat my brains about.

_____
* Hermann, a marvelously uneven composer might just be the most important unadmitted (becaused he's academically unadmitable) influence on younger composers. In addition to his scores, he should be well remembered for his championship of the music of Charles Ives. The other film composer I always find interesting is Alex North.
** You know all the usual suspects.
Posted by Daniel Wolf at 7:12 PM

Bernard Hermann's score to "North by Northwest" is definitely Top 10 material for me, and you're absolutely right about its wide [and unacknowledged] influence. As for the usual suspects, would the great, rippling finale of Rossini's "William Tell" be part of the lineup?

Those triplets in the Rossini are not quite the same, but they have a similar effect.